Will Cold Fusion or the solar powered bikini, the iKini, power your next embedded system?

The term 'Cold Fusion' has lots of baggage with it today, so most of the research takes place under the term Low Energy Nuclear Reactions or Chemically Assisted Nuclear Reaction, or simply LENR-CANR.

A summary of Andrea A. Rossi's Cold Fusion Generator has been put together by Sterling D. Allan and Hank Mills.  Nickel and Hydrogen in the presence of proprietary catalyst under pressure  are claimed to produce 15,000 thermal Watts output with 400 thermal Watts input.  There have been independent tests to confirm numbers like this.

From what I've gathered a company operating under the name AmpEnergo is going to distribute Rossi's technology in the Americas.  There are a couple of different web sites calming to be AmpEnergo's and it is not clear to me which one is the legitimate one.  From an official document issued by the Ohio Secretary of State, Jennifer Brunner, AmpEnergo is apparently registered to operate in Ohio.

A lot more details can be found in the "April 2011, updated May 2011" LENR-CANR News.  Decide for yourself if this technology looks 'real'.

I have little background in chemistry, other than what I've learned related to batteries, however to me Rossi's stuff looks more like a thermogenic compound, than 'Cold Fusion'.  That is, a compound that generates heat.  In Harold King's novel, that I've mentioned before,  Red Alert

a couple of different thermogenic compounds are used.  One based on Aluminum powder and one based on Iron powder.  A line from the book: "How do you know the big one [the Iron based one] has not gone off yet?  Because we are still here!"...


If 'Cold Fusion' is not 'hot' enough for you then maybe this hot little number by Andrew Schneider will be.  He has created something that might power your next Embedded System. A solar bikini, known as the iKini. Your imagination might come up with some interesting tests for the system model.  Not sure what more I could possibly say about this here?  I do hope he is better at hardware design than web design as neither of his web sites rendered correctly in any browser I tried. 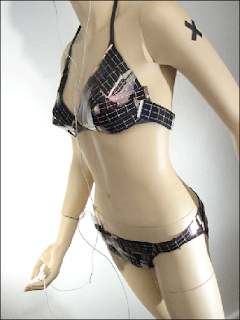 Myself if I was doing a practical solar design I'd use some  Ixys IXOLARTM High Efficiency Solar Cells that can be handled by normal pick-and-place equipment.  They can be gotten from Mouser.  The cells would be followed up with a Maximum Power Point Tracker from either ST, SPV1040, or the Linear Tech LT3652 chip or LTM8062  μModule.

A good friend of mine, the late John Draper, had a patent 4,651,080 "High Efficienty Battery Charging System"; March 17, 1987, that put solar cells in a unique series-parallel combination to match the inherent impedance of a Lead Acid cell.  If any one is interested I'll post the internal test documents of SylCell, the company that was going to promote this technology before John's untimely death.  Tests showed large increases in charging efficiency.