The headline reads: Huge blast at Japan nuclear power plant at Fukushima-Daiichi, are we seeing a real life version of the China Syndrome about to playing out? Let us all pray that is not the case.

The China Syndrome is when there is a loss of coolant in the reactor vessel. The idea being the reaction becomes so hot that it burns down through the Earth until it comes out the other side in China. What really happens is the hot reaction burns down until it hits Ground Water, which is then turned into superheated steam, blowing the whole mess back up into the environment.

Obviously somewhat outdated, as it says "Operating Fully", design information on Fukushima-Daiichi can be found at Global Energy Observation. Fukushima Daiichi is located at 141.0329686159818, 37.425775181836 if you'd like to find it on Google Earth.

The Nuclear Regulatory Commission (NRC) regulates commercial nuclear power plants that generate electricity, in the United States. They have a lot of educational material on how Nuclear Reactors work. There are several types of these power reactors. The two types that are most prevalent, in the United States, only the Pressurized Water Reactors (PWRs) and Boiling Water Reactors (BWRs) are in commercial service. I've been told by people more knowledgeable than I that Japan's reactor is a BWR type. 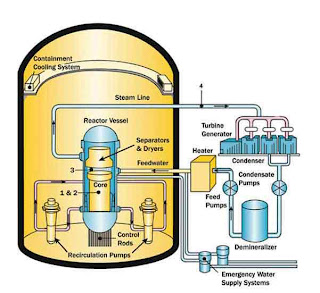 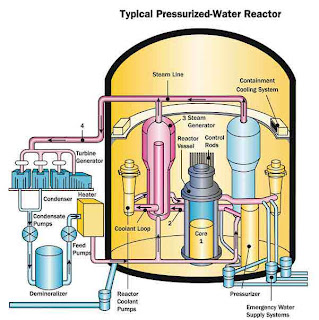 Images curiosity of the NRC.


The Teachers instruction manual Reactor Concepts Manual might be of interest to you to read, especially chapter five:


There are various radiation monitoring systems in operation around the world. The one of most interest in northern Japan is at present either damaged or disabled. Which shows that we must always consider catastrophic design issues in our Embedded Systems designes.

Other monitoring systems that I know of are the German radioactivity monitoring network ODL-Netz, which opens a map with about 1800 stations, the stations are clickable and show the measurements in the last seven days. There is also the Community Environmental Monitoring Program in Nevada, where Gamma Radiation is measured and recorded near real time.

Do you know of any others, particularly ones that are World Wide? [Shades of Harold King's novel Red Alert

where a super secret world wide radiation monitoring system is a central part of the plot.]

The U.S. Geological Survey has a map of the Latest Earthquakes in the World - Past 7 days

Some have speculated that recent Earthquakes have been the result of increased solar activity, such solar activity is documented by NOAA / Space Weather Prediction Center.

For those that really want to crawl out on a limb, some say around March 20th, and/or April 18th, will be the next massive Earthquake, probably in New Zealand, based on a recent trend, and the Moon reaching lunar perigee, its closest approach until 2016. That there is a connection between the Moon and Earthquakes is not speculation, it is Tidal forces at play.
Posted by Bob Paddock at Saturday, March 12, 2011