When is it time to say 'No' designing a pain giving device?

I just came across the Pavlok a device that by design is to cause pain; Reference: Pavlov's Dogs.

THE FIRST DEVICE THAT BREAKS HABITS BY DELETING TEMPTATION.
PAVLOK ASSOCIATES A MILD ZAP WITH YOUR BAD HABIT, TRAINING YOUR BRAIN TO STOP LIKING THE HABIT.
THE ZAP IS AN ELECTRIC SENSATION THAT RANGES FROM PLEASANT TO SLIGHTLY UNCOMFORTABLE. 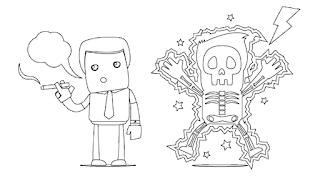 I realize the debate about designing weapons that kill people have been going on forever and we are not likely to have answers to that debate here.

What happens when the software in the device or its control app have bugs? What are the security of the device being 'hacked' or used by the mysterious evil 'Them' (fill in your choice of conspiracy group)?

The one that really puts it over the top for me is linking this pain giving device to Smart Meters. Set your thermostat to high you get Zapped. Is this really the world we want to be creating with the Internet of Things (IoT)?

...Prof Alan Woodward, a cybersecurity expert from Surrey University, said the more connections which are made between devices, the greater the risk of a security weakness.

"Having a convoluted interaction between systems is almost inevitably going to lead to unintended security flaws," he said.

"I know this type of technology is developed with the best of intentions but the road to hell is paved with them."

"Just because you can connect devices en masse doesn't necessarily mean you should." -- http://www.bbc.com/news/technology-36301778

Having watched my late wife suffer from Chronic Pain for years I will refuse to be involved with any device that causes someone to experience any level of pain. Karen's Journal is required reading at Duke School of Medicine.


Karen's first-hand account of her illness gave an honest, heart-wrenching depiction of what it is like to live with debilitating pain day-to-day. -- The Derrick Newspaper, Sept 8th 2014.

The cell phone "radiofrequency radiation (RFR)" study is led by the NTP, headquartered at the National Institute of Environmental Health Sciences. The NTP has posted their report of the study’s findings: Report of Partial findings from the National Toxicology Program Carcinogenesis Studies of Cell Phone Radiofrequency Radiation in Hsd: Sprague Dawley® SD rats (Whole Body Exposure). Note the comments about the study. Some are insightful for future studies most are just the usual fear mongering.

Length report http://microwavenews.com/news-center/ntp-cancer-results that can be summed up this way:

"Importantly, the exposed rats were found to have higher rates of two types of cancers: glioma, a tumor of the glial cells in the brain, and malignant schwannoma of the heart, a very rare tumor. None of the unexposed control rats developed either type of tumor."

If you are at all interested in this stuff a book you MUST read is The Body Electric by the late Dr Robert Becker (Not Bob Beck).

There also lots of scam devices out there that sell you something to reduce cell phone radiation then show before and after thermal graphs. I want to see a thermal graphs of an empty cell phone case held to the head. I expect it will give the same thermal graph.

If such a device worked there will be a noticeable decrees in battery life. If the 'radiation' is reduced the cell tower would get a weaker signal and the range would be less. The transmit power level of a cell phone is controlled dynamically which is why when it places with poor cell phone reception the battery drains faster due to the phone using a higher transmit power. If such a device worked it will drain the battery faster even with no connection to the battery.

A simple way to reduce exposure is use wired ear buds. They still don't bring the risk to zero. Bluetooth Handsfree headsets are not improvement. Bluetooh operates at 2.6 GHz. The same frequency as your microwave oven and WiFi. I'm not putting a tiny microwave oven next to my head...