The current Temporal War on planet Earth. The August 2011 edition of Metrologia.

Going on here on Earth right now is a real Temporal War. This Temporal War is not Science-Fiction, it is about the future of Time itself, as in how it is measured. Right on time, the August 2011 issue of Metrologia has appeared. This issue, Volume 48, Number 4, is all about Modern Applications of Timescales:
The article are free until the end of August 2011, after which time they go behind a paywall.

In this War there are several factions, such as those that believe that Time should be tied to the Earth rotation. The problem is that the Earth rotation is not constant. To keep our clocks on the wall synchronized the concept of Leap Seconds has to be introduced were a second is added or subtracted every six months from Universal Coordinated Time. From the Embedded System perspective this means an hour can legitimately have 61 seconds in it. Have you accounted for that in your system? An hour could also only have 59 seconds. Maintaining time spans across years becomes a problem, necessitating the use of tables of Leap Seconds. 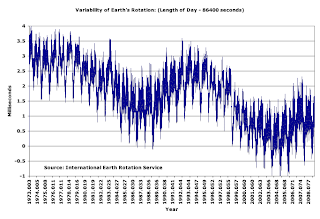 In one of the other major factions they want to do away completely with the concept of Leap Seconds. The clock-on-the-wall-time would slowly drift away from the look-out-the-window-at-the-Sun-Dial-time. This faction believes that it will simplify our lives as programmers.

There are also a few lessor factions at play. Based on input from the International Astronomical Union, the Bureau International des Poids et Mesures, the Consultative Committee for Time and Frequency (CCTF), the International Telecommunication Union (ITU), is close (in 2012) to the moment of making a decision on whether or not to decouple UTC from its tight link to the rotation of the Earth.

Who is going to win this Temporal War? I do not know, it might come down to the group with the biggest Ray-Gun. One thing is for sure, that in a year or two keeping accurate Time in our Embedded Systems might just get a lot harder. Follow the daily battle and decide which camp you want to put your future with, on the Leap Second List.