On April 13, 2010, Davitt McAteer was asked by former WV Governor Joe Manchin, III to form an independent investigation panel to investigate the cause of the Upper Big Branch Mine explosion that took place on April 5th 2010, and to offer recommendations to prevent future explosions. The panel has issued its final report to the Governor, the Governor's Independent Investigation Panel (GIIP). The report can be viewed here, and errata here.

On April 5th 2010 at 3:01 PM local time twenty-nine miners died and one was seriously injured with life altering injuries as the enormously powerful blast rocketed through two and one-half miles of underground workings of the Upper Big Branch mine, nearly 1,000 feet beneath the surface. Of the 29 men killed, 19 died as result of carbon monoxide intoxication, and the remaining ten died as a result of injuries suffered in the devastating mine explosion. To date this is the most deadly coal mining disaster in the United States in 40 years.

For the rest of this blog to make sense to those who have never had the experience of being in a real production coal mine we need to define a couple of terms:
The picture below is one from my personal archives, not one from the report, which has several pictures of evidence and memorials. My picture shows a typical Joy longwall shearing machine. 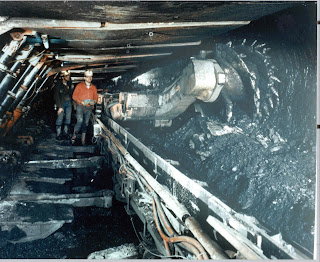 The report gives a minute by minute sequence of events leading up to the disaster, and the agonizing wait of the families for days to find out if their husbands and fathers would ever return home. The final identification of the deceased came when they removed the bodies on April 10, 12 and 13. A family member told the Governor's Independent Investigation Panel that this time was particularly agonizing because each family was holding out hope that their loved one was one of the missing, not one of the dead.

Picking up the event log moments before the explosion:

At 2:59:38 PM, the crew cut power to the longwall by disconnecting the shearer manual stop button, as logged by the Joy Network Architecture (JNA) control system sold by Joy; a system that I was once imminently familiar with in a past life. This shutdown is standard industry procedure when potentially serious problems occur on a longwall, and it is something that had to be done manually.

Also the electrical breaker to the shearer, located at the headgate, was found "knocked," meaning that the power to the shearer had been manually disconnected. The removal of power in this manner can only be done by someone at the headgate. A person must both push in a button and pull a lever. The disconnect has a visible "off" position. The water to the longwall face also was turned off at the headgate, something I personally find odd. Longwall crews do not leave the face area unless it is quitting time or there is an emergency. The longwall face at Upper Big Branch was 1,000 feet wide with 176 shield bases for a miner to step over. Walking through this narrow space and having to duck, and not kill your shins as I can personally attest to, in the low areas means a miner would have to have a good reason to leave the longwall face. Investigation tells us that these men witnessed something ominous and took steps to try to avert a disaster. Regrettably, they were not able to do so.

3:01 - 3:02 PM, Explosion erupts through the mine blasting debris out the portals and lasting for several minutes. The carbon monoxide monitoring system alarms and mine fan records show a major disruption to the ventilation.


Governor's Independent Investigation Panel has concluded that the ignition point for the blast was the tail of the longwall. As the shearer cut into the sandstone mine roof, the resulting sparks ignited a pocket of methane, creating a fireball. The fireball in turn ignited the methane that had accumulated in the gob during the Easter weekend and leaked onto the longwall face. The fireball traveled into the tailgate area, where accumulations of coal dust provided fuel for a second, more deadly, force. This dust-fueled blast ricocheted in multiple directions, traveling across the longwall face, into the tailgate entry, and through more than two miles of the mine.

The report states that deep water collected - at times neck-deep - (I've personally waded through waist deep water in mines), and tracking systems that did not work, as well has reports of shortcuts taken in safety in the name of profit.

The comment on page 65 "band-aid approach" hit me personally. I've been in mines, many of them over the years. I once asked the longwall foreman that I was with why the 4400VAC trailing cable (powers the shearer) had so many band-aid's (several layers deep) on it, "did it get an ouchy or what?" I recall asking. His answer was chilling: "Management thought we were using to much electrical tape, so they refused to give us more. They don't care how many band-aids we use."

I also found the cartoon on page sixteen by Nick Anderson from the Houston Chronicle offensive, it has no place in a report that claims to be objective. Steve Fiscor Editor-In-Chief of Coal Age Magazine also feels the report lacks objectivity.

Ultimately, 29 miners lost their lives in the Upper Big Branch mine because multiple safety systems failed in a major way, from technology to management to government regulators. Read the report and keep it in mind when you thing of taking a shortcut in safety, or some boss starts pencil whipping you. Do you want a death on your conscious because of a shortcut in the name of production?