The Northeast Ohio Professional Chapter of the Association for Computing Machinery (NEOACM), in association with the Youngstown State University's Student ACM and Computer Science Department is sponsoring a college screening of a drama-documentary on the life of Alan Turing titled CODEBREAKER. Patrick Sammon, the Executive Producer and Creator of CODEBREAKER, will attend this screening to introduce the film and provide Q & A afterward. This screening will be free and open to the public and will take place on September 12, 2013 at the Williamson Auditorium on Youngstown State University's campus. NEOACM is looking for sponsors for this event. 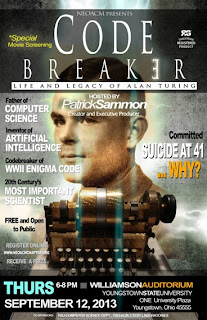 This drama-documentary is about the heroic life, death, and legacy of Alan Turing, one of the 20th century's most influential scientists, yet few people have heard his name, know his story, or understand his legacy. Turing was a British mathematician and logician, who made major contributions to mathematics, cryptanalysis, logic, philosophy, and biology. He also laid the foundations for computer and cognitive science, artificial intelligence, and artificial life thus laying the foundation for our modern society. Turing's crucial involvement in breaking the German naval Enigma code during World War II is accredited by historians in helping shorten the war by two years and saving millions of lives. Tragically, this great mind only lived 41 years. In 1952, British police arrested him for having a relationship with another man. Two years later, Turing committed suicide due to events surrounding his arrest.

Considering Turing's wide influence, this film is ideal to be watched by students and professionals of a wide variety of disciplines including computer science, mathematics, engineering, informatics, information security, biology, and history. During 2012, marked the 100th anniversary of Alan Turing's birth, universities, technology centers, and professional associations worldwide celebrated by honoring his legacy. This special screening will enlighten a well-varied audience and inspire them to value diversity in their profession and in our world.
It is our hope you will see the value of this screening on YSU's campus and will choose to serve as a sponsor for this important event or join as an advertiser!
If you have any additional questions or concerns, please do not hesitate to contact Tracey Hughes: secretary@neoacmchapter.org